The best gaming can only be achieved with the best gaming headsets. It would be pointless to play awesome games without awesome sound. Moreover, many popular games, such as first-person shooter games, require the use of a high-quality headset to play the game at any competitive level.

Unfortunately, many high-quality gaming headsets are cost-prohibitive for players. There are, however, a few gaming headsets that are both well made and affordable. This article will explore the most important aspects of a good headset, as well as list some of the best headsets available for less than $100.


Should I Get a Wired or Wireless Gaming Headset?

Whether you get a gaming headset that is wired or wireless is largely a matter of personal preference. That being said, gamers who play primarily at their desktop tend to prefer wired headsets, whereas gamers who use consoles gravitate toward wireless ones.

Wireless headsets can be somewhat more expensive than wired ones, but there are still some out there for under $100. And as far as sound quality goes, there isn’t a noticeable difference when comparing wired to wireless headsets.

If you do opt for a wireless headset, keep in mind that you will have to charge them regularly which some gamers might find to be a nuisance. Some of the better headsets will have batteries that last 15 hours or more. You should probably get one that lasts at least 12, so you don’t have to charge it too frequently.

The sound quality of your gaming headset mainly depends on whether you’re headset is using stereo or surround sound. Surround sound, of course, is much better than stereo, as many games require the player to approximate enemy position by sound. Stereo sound, although usually crystal clear, doesn’t always work as well as surround sound for this purpose.

Some headsets allow you to program audio presets into them, so you don’t have to adjust the audio settings every time you play. Just select which preset you need based on the game you’re playing, and it will automatically use the settings you programmed it with.

Using a gaming headset that is comfortable is essential if you want to play the game to the best of your ability, and get the most enjoyment out of the experience. Playing with a lightweight headset is a good start for keeping things comfortable. No one can play all that well with some heavy object weighing their head down the whole time.

A good strong headband is necessary as well, to keep the headset in place while gaming. Try to find one with a lot of padding to increase comfort. The ear pads should be soft and comfortable. The best are made from materials that inhibit sweating.

What Makes a Great Mic?

It’s impossible to play certain games without being able to communicate with other players. As such an excellent mic should be a feature of any serious gamers headset. A good mic should be adjustable and can be folded or retracted out of the way when not in use. 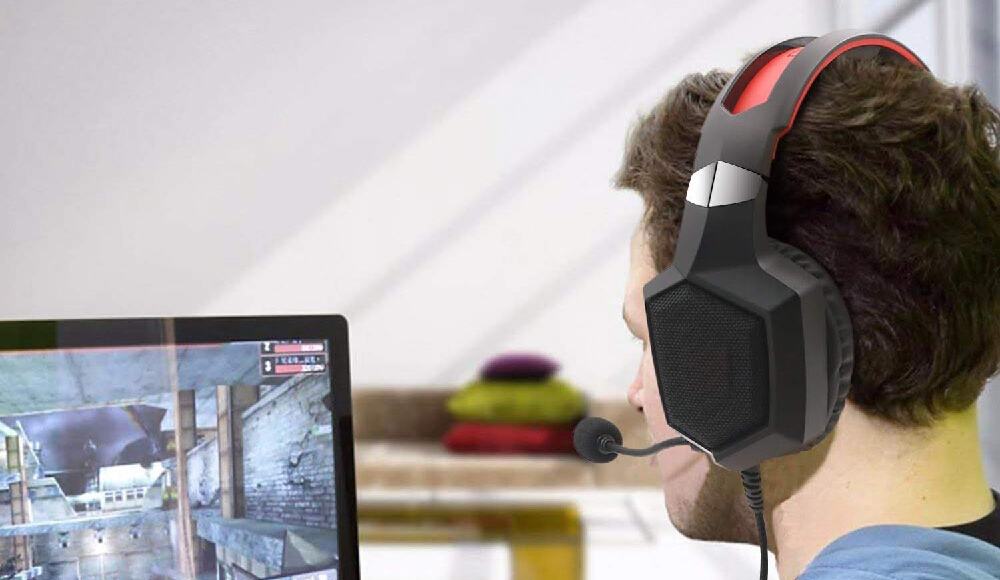 Gaming headsets with noise-canceling mics will ensure that other players can hear what you say clearly. The headset should also have buttons that can control the volume of the mic and the audio. This will allow you to adjust the volume accordingly so you know you’ll be able to hear your teammates over the audio of the game.

How Do I Keep My Gaming Headset Clean?

To get the best performance out of your headset, you must keep it as clean as possible. Bad sound quality can result from dirt building up inside the earcups. Worse yet, germs and sweat can build up in them too.

Unplug your headset and take off the ear pads. Moisten a soft cloth with warm water and a tiny bit of dish soap. Gently wipe the ear pads inside and out. Use a q-tip for tough spots if needed.

Now that you know a little bit about gaming headsets take a look at the following list of the best gaming headsets priced under $100. There’s plenty of options available, so if you’re a gamer on a budget, you’ll definitely be able to find one you like.