We put the Hoover React Whole Home cordless vacuum through a bunch of tests and this is our review based on the results. There are a few versions of the Hoover React cordless vacuums. We have the advantage version which has a few more attachments, but otherwise is the same machine as the other whole-home cordless models. It’s actually jam-packed with features including its floor sense technology which senses if you’re vacuuming hard floors or carpets and adjust the brush roll speed accordingly, but you can also manually turn the brush roll on or off as well.

It has a sturdy floor head with an innovative swivel. It also has LED lights. It has an app that you can use to turn the brush roll on or off as well as a few other things but nothing all that useful in my opinion. Let’s first look at the pros for the Hoover React cordless. It’s a bit more powerful than other cheaper cordless vacuums. We measured its suction at 24 inches of water lift and its airflow at 30 CFM at the cleaner head and 37 CFM at the wand.

It does only have one power setting, but for context, it’s more powerful than either the Dirt Devil or the Eureka cordless vacuums and it’s just a bit more powerful than the Dyson V10 on its medium power setting. Another pro is that it has a pretty good battery life. We measured it at 21 minutes and 6 seconds with the cleaner head attached, which when you consider that that is effectively on high power since it only has one power setting, it’s better than any of the cheaper cordless vacuums we’ve tested so far.

Related to that, its battery is easily removable and Hoover sells extra batteries if you wanted to get a longer cleaning time, which is more rare than you might think. Another pro is that it’s fantastic for carpets. It plowed through all the debris fields we put down, including fine debris, pet hair, and large to extra-large debris. Like most cordless vacuums, it doesn’t have as much agitation as a corded vacuum but it did seem to deep clean the carpets better than most cordless vacuums.

Its hard floor performance was sort of a pro in that it did flawlessly with fine debris, including the difficult to pick up sand. It even did good with medium debris. But with large to extra-large debris, it really struggled. It really was a pain to pick everything up even after lifting the unit up a few times. But as a result of that smaller debris gate, it did weigh better at the crevice pick up test than the Dirt Devil cordless, for example, as the smaller gate does allow for a pretty good seal on hard floors.

Moving on to the cons. Its bigger battery really does weigh down the handle, and at 7.3 pounds, it’s the heaviest cordless I’ve tested so far and you really do feel it on your forearm when vacuuming. And it’s really noticeable when using it free hand, like for getting cobwebs, etc.

Another thing I didn’t like was, although it has an usually big dustbin at three cups, I rarely was able to empty it without having to dig around a little to get stuck debris. At first, I was really frustrated because it didn’t seem like you could access the interior components for deep cleaning, but then I realized you can pull the main part out since it’s just a rubber seal so that’s pretty good. Also, it’s very hard to pull the wand and attachments off. I mean, you really have to yank the wand to get it free of the handheld unit. 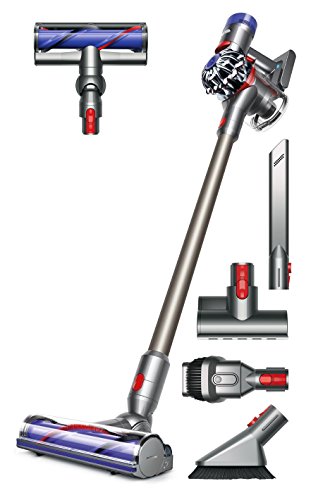