In this article, we are reviewing the Amarey A800 robot vacuum. We put it through several tests, and the results were pretty interesting.

Amarey currently has two models. The Amarey A800 is an affordable robot vacuum that has started to make a name for itself in a pretty crowded field. It has some really good reviews online so we thought we would buy one and give it a try.

The Amarey A800 comes with a charger and an extra filter and brush. The unit has two side brushes which we prefer over the models with a single brush.

The robot vacuum features random navigation, which is typical for robots in this price range. As we will read later, the unit has a pretty decent algorithm and coverage.

We start by testing the robot’s power, specifically its airflow with an anemometer. We found that the Amarey A800 had 13 CFM on high power and 9 CFM on the low power, which is pretty significant. It has more CFM than the popular Ecovacs Deebot N79S or the iRobot Roomba 690. But is not quite as much as the Eufy 11S or any of the more expensive robots which tend to reach about 17 to 20 CFM on max power.

Its power was visible in the crevice test, where it got debris from the 1/8” crevice and also from the middle crevice. This is a bit better than some other robot vacuums that have a touch more power.

In terms of its pickup ability on hard floors and carpets, we found that the Amarey A800 could pick up everything from fine debris to extra large debris. The unit did leave some debris behind on low power, but it did much better on high power. The debris did leave behind was mostly related to dirt left in a corner or edge.

In general, we were impressed with its hard floor performance. One more thing to note was concerning pet and human hair. We liked that it has a dual exhaust that is somewhat diffused, which means it doesn’t blow light debris like pet hair around. This function doesn’t sound like a big deal, but you would be surprised how many robot vacuums won’t deal with that.

While we are on the hair test. The vacuum did get the human hair wrapped around the brush, which is typical. However, the robot vacuum did resist getting tangled by the shorter pet hair, which is more than you can say for its direct competitors, the Deebot and Eufy.

On carpet it did almost identically on both low and high power, picking up all the debris that was put down. The little that was left behind was related to the edge and corner cleaning, not the lack of pick up ability.

With the carpet deep clean test, where we embed exactly 100 grams of sand into a med pile carpet and weigh the bin before and after, it scored 62. This is better than its main competitor, but still, the middle of the road if not below average.

Its battery life was maybe a little above average though at 100 minutes, with a definitely above average dust bin capacity at 500ml almost 40% more than a typical Roomba.

It was also really quiet at 59 dB on low, to 62 on the high suction setting, which is one of the quietest robots we have ever tested

Let’s move on to its navigation and obstacle avoidance. First, it has a really low profile at 2.7 inches it made it under 3 of the four height clearances, and it’s the only robot vacuum that has been able to consistently clean under the couch in our new obstacle course so far.

Though for the same reason, it couldn’t climb the ¾ threshold, most robot vacuums have trouble with it, but the Amarey doesn’t even come close to climbing it.

As far as coverage we did some 15 minute and 30-minute tests in 2 locations. With the 15 minute test, it did much better than the Eufy, which was surprising, covering a pretty good portion of the room in a short period.

With the 30 minute tests, it did good in the big room, typically random bots need more than 30 minutes to cover this amount of space, but even so, it almost got it all. 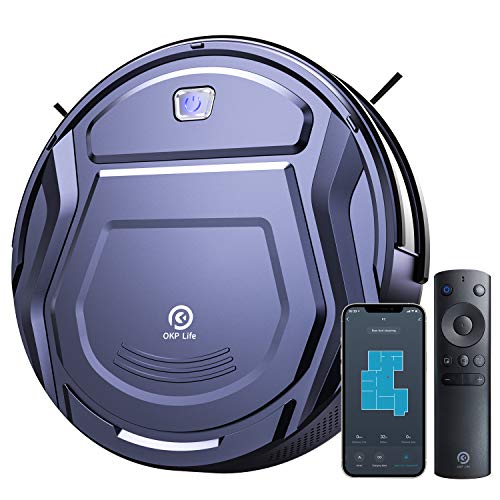