Continuing with our series on cordless vacuums, we’re very excited to be reviewing the brand new Shark ION P50 cordless vacuum. It’s completely unlike any cordless we’ve tested so far. We put it through a ton of tests and there’s a lot to like.

Let’s start off with the pros. The DuoClean technology is a major pro. DuoClean technology means the floor nozzle has a soft roller in addition to a standard brush roll. We’ve been using Shark DuoClean vacuums exclusively in our cleaning business since they came out. There just isn’t any cleaner head technology out there that compares in my opinion.

On hard floors, it’s nothing short of amazing. It picks up everything from fine debris, including heavy fine debris, like sand, to pet hair and large debris of just about any size. DuoCleans actually seem to dust the floor as well as pick up the debris. They really are hard floor heroes.

On carpet, the same amazing performance is evident. There doesn’t seem to be anything it can’t pick up. In fact, I tend to get overconfident when preparing pick up tests for Shark DuoCleans putting them through torture tests that are impossible for other vacuums just because they can do it. So I can say confidently that the Shark ION P50 is the best cordless vacuum I’ve ever tested in terms of its ability to clean floors.

We also like that you don’t have to change the cleaner heads when switching from carpets to hard floors, like you do with the Dyson cordless vacuums, as there’s a button on the handle that slows the brush roll speed for hard floors and speeds it up for carpets so transitions are painless and instantaneous.

Another pro is its power. We measured its suction at 79 inches of water lift, which is the highest we’ve ever seen on a cordless, and its airflow at 36 CFM on max power at the cleaner head and 44 CFM on max at the wand and 26 and 28 CFM on low power. We should mention that its max power, or power boost, button can be tapped once to continuously run when using it as a handheld vacuum, that is without the cleaner head attached.

But with the cleaner head attached, the power boost only runs when you hold down the button. In other words, you can’t run it continuously in boost mode while vacuuming unless you want to hold down the boost button. That being said, we found that its standard low power was more than enough. I ran these tests twice, once with the high power button pressed and once without, and did not encounter anything that it could not pick up on low power. The power and floor nozzle seal on hard floors was also evident in the crevice pick up test where it picked up the debris from both crevice sizes in one pass, which is extremely rare.

To make sense of those battery life numbers, you would have about 30 minutes of regular vacuuming time which blows away every other cordless vacuum we’ve tested, except for the Dyson V8 and V10. But when you factor in the CFM numbers, they’re pretty much the same. For example, the Dyson V8 gets 33 minutes and 30 seconds at 25 CFM, and the V10 gets 27 minutes at 31 CFM, and the Shark ION P50 gets 31 minutes at 28 CFM. So it’s basically the same if not slightly better.

Another pro is the crazy large dustbin. In fact, it was so big that the measuring cup we usually use for cordless vacuums proved too small. It’s maybe a little more than four and a half cups which is certainly larger than any cordless vacuum on the market and larger than a lot of upright vacuums as well.

I also found the bin to be easier to empty than most cordless vacuums. The design really isn’t prone to stuck debris, even with pet hair, so you won’t have to be digging debris out with your hands, like so many others we’ve seen. It has a lot of features, including bright LED lights on the floor nozzle, a decent attachment set including a combo brush crevice tool, a dusting brush, and an upholstery tool. It has a dock for the battery but no wall mount since the vacuum can stand up on its own, which is a pro in and of itself.

As far as its weight and maneuverability, it’s hard to say if it’s a pro or a con because, in one sense, it’s one of the heaviest cordless vacuums as far as a dead lift, but it quickly becomes one of the lightest cordless vacuums when you use it in lift away mode, which I prefer anyway. In fact, I pretty much use the lift away mode exclusively with my other DuoClean vacuums where the heavy portion is kept on your non-dominant hand, which doesn’t require much muscle movement to just hold there, while the vacuuming hand does all the work with hardly any weight on the forearm.

But even in its standard mode, it’s pretty easy since all the weight is on the floor as opposed to on your hand as with all the other cordless vacuums. Before we move to the cons, I also like that the wand is so easy to pull out for getting things up high or for the rare cases where you encounter debris that’s too large for the dual clean to pick up.

Moving on to the cons, the main con is the price. At the present time, the only cordless vacuums more expensive are the Dyson V10 and the Oreck POD. So it’s a big investment, but as we’ve seen, it does represent the best of the best in cordless vacuum technology right now so it’s worth it. But it is pricey. We also wish that the floor nozzle neck was a little less tall because that extra height makes it kind of hard to use the DuoClean head on stairs, which is my preferred way to vacuum stairs. You can, of course, use the other tools but we prefer the floor nozzle. 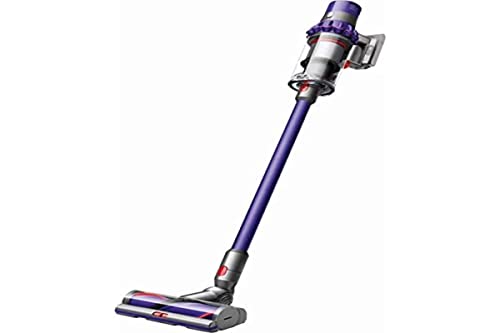