We will talk more about the navigation later but the main difference between the E35 and the top of the line Roborock S5 is that the S5 does its smart navigation by using a laser on the top, where the E35 uses a combination of gyroscopes, an electric eye, and a pretty darn advanced algorithm to accomplish its smart navigation. Doing it that way, the Roborock E35 can be sold a lot cheaper than the S5, and we will talk more about the merits of each type later on.

We started out by testing the power after all Roborock says that the E35 has 2000 pa of suction, 200 more than the E25. We tested the airflow with an anemometer on all four power settings which are called;

The results pretty much mirrored the E25 numbers as well as the S5 numbers, which are all well above average for robot vacuum cleaners.

The additional suction power showed up with the deep clean test on carpet. In this test, we embed exactly 100 grams of sand into a medium pile carpet and run it for 5 minutes and weigh the dust bin, and the E35 set a new record at 77 gram – which is five more grams than its predecessor the Roborock E25.

On carpet it didn’t seem to matter if low or high power was used, in both cases, it picked up all the debris with no issues, and left almost nothing behind at the end of its run. The suction was very much above average for cleaning debris off the surface of the carpet.

That being said, we would use the carpet boost mode from the Roborock app, which means you can run it in low or medium power to save battery life. When it senses carpet, it will automatically boost the suction so that you can get the benefit of that excellent deep cleaning we talked about earlier.

On hard floors, there was a bit of a difference between low and high power. On high power it had one of the better pickup performances we have seen, a nice clean pickup, without scattering debris, picking up even heavy debris like sand on the first or second pass.

Basically, it’s the exact same performance of the S5 on high power, which isn’t surprising since they are using the exact same interchangeable components in the same configuration.

The robot’s super low power did really good with most debris types, but for the fine debris, it took several passes to pick it all up. So on hard floors we would recommend using at least the standard or strong setting for hard floors. The “Max power” may be overkill, but the results were outstanding.

Its edge cleaning was also superb, again one of the better performances we have seen. This is mostly due to the unit having been programmed to make a dedicated edge cleaning pass at the end of runs. With smaller areas like this test area, it makes two “edge cleaning” runs.

The pet hair and human hair test was great. So the first thing we noticed was the complete lack of exhaust disturbance with light debris, so many robot vacuums blow light debris around everywhere and this is an example of Roborock paying attention to details. It has a dual exhaust which is diffused, meaning a lack of disturbance of the hair or any other light debris.

But the really impressive part of this test was the brush at the end of the test, Roborock does call this an “anti-tangle brush”, but pretty much every robot vacuum manufacture makes the same claim. Roborock is literally the only brand we have seen to date that actually resists pet hair tangles.

We bought the Roborock E35 on Amazon so we could get the fast shipping and excellent return policy. The price will likely change over time, so click this link to check the current price of the Roborock E35 Robot Vacuum and mop on Amazon. 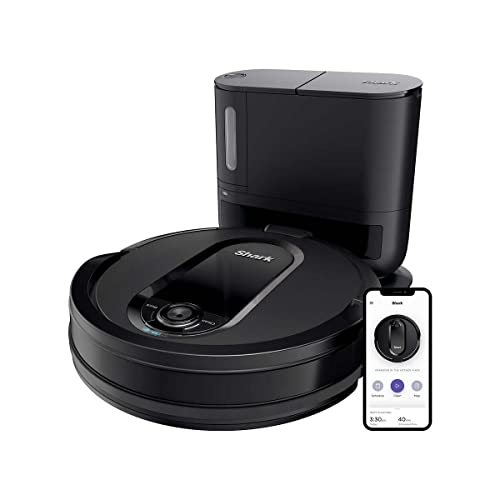